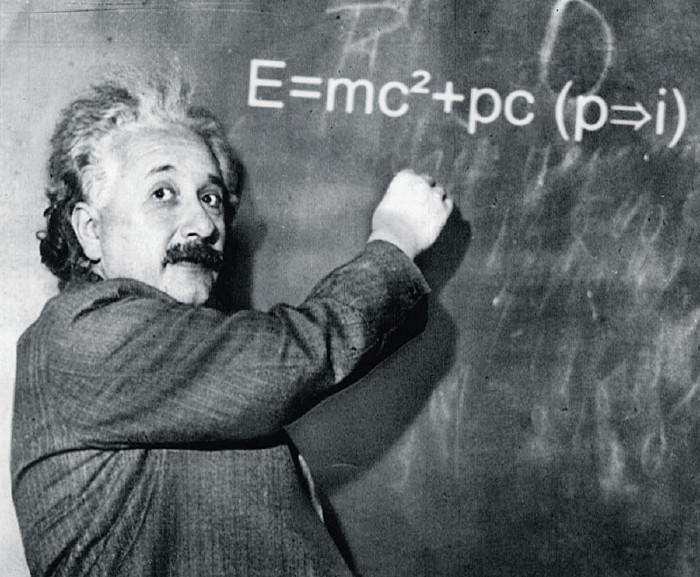 Einstein’s Forgotten Secret – This changes everything

Einstein’s equation is not comprised of 3 components (scientists know this): E = mc²+pc (energy, mass and momentum).

It is comprised of 4 components E = mc²+p₍ᵢ₎c because p⇒i (energy, mass, momentum AND information because momentum implies information.

I discovered this through my work with virtual reality. Because in a virtual universe every object is defined by coordinates on the xyz axis.

So, in order to sufficiently describe any vector you need a minimum of 6 coordinates. It also means that there is a vector-information equivalence since having the 6 pieces of information is the equivalent of knowing the exact length and direction of the vector.

Just like with the mass–energy equivalence, which states that anything having mass has an equivalent amount of energy and vice versa, there is now also an energy-information equivalence.

You can observe this in everyday life. The more information you add to a system, the less energy you require. Let’s say you send 2 drivers to deliver a package. To the first driver you only give the address and you tell him to drive as long as it takes until he finds the address. To the second driver you give a map with a highlighted path to the destination. The first driver lacks information and will have to drive for a long time to find the address by driving down many, many streets. He will need a lot of gas (energy). The second driver will go straight to the destination at a fraction of time and gas.

Business leaders know this as well. In order to drive productivity you have to improve know-how, in other words information contained in the business processes.

The implications of Einstein’s forgotten secret are immense. Think about the invention of nuclear energy. A tiny mass can  produce an enormous amount of energy. With the complete equation it is now possible to convert information directly into energy.  Physicists in Japan have shown in experiments that a particle can be made to do work simply by receiving information, rather than energy. The experiment by Shoichi Toyabe of Chuo University in Tokyo (2010), is the practical realization of a thought experiment by James Clerk Maxwell  (1871).

This means that the energy plants of the future may be information factories.

I used my insight of the 6 data points in many ways. When I create a new algorithm I start with a baseline of 6 standardized data sources.

Nature does this as well:

The number 6 is the atomic number for carbon, the element that is present in all living matter.

The standard flute has six holes.

The standard guitar has six strings.

In the beehive honeycomb, the cells are six-sided.

The sixfold symmetry of snowflakes comes from the hexagonal crystal structure of ordinary ice.

The number of tastes in traditional Indian Medicine called Ayurveda. They are: sweet, sour, salty, bitter, pungent, and astringent.